After a long but smooth flight we arrived in Zambia! We were met by the lovely Mwape from Sport in Action who gave us a warm welcome and a brief tour of the area.

The house is superb – we’re living with some of the Sport in Action coaches in a typically Zambian residential area and already feel right at home. The evening chats with Sami, Caeser and Stephen go on till late and we enjoy listening to their stories and generally chatting about life in Zambia. Surprise, surprise – sport is a big thing here!

Yesterday was our first full Zambian day. After going to the Sport in Action office we visited the school in Mtendere where last year’s team built a netball court, which was being well used and loved by the school. The reaction from the children when we arrived was amazing! With extra loud screams coming when familiar face Fraser Robinson waved at the classroom.

After greetings and a brief chat with the head teacher it was then over to Munali High School, our site for this year. It was a fantastic moment seeing how popular the volleyball courts built by A2Z last year were! And generally seeing how much the students of Munali enjoy their sport with netball, basketball, football, and rugby also being played in the fields. This gave us a great feeling that the outcomes of our project this year will be put to good use!

We met the contractors and chatted about different ideas and what we want to achieve. The first project is the construction of a netball court where they currently play on an overgrown patch of earth – which was being completely disregarded compared to the other tarmac courts.

Another project, about a hundred metres from the netball court, is renovating some existing changing rooms, which are in a state of disrepair. The toilets, for example, haven’t worked for a while and we discovered the sewage system was entirely blocked up with sand washed in during the rainy season. Termites are also quite an issue, having eaten away at some of the timber beams and undermining the changing rooms. A good example of how we can provide expertise is in the safe removal and disposal of the asbestos roof tiles.

Design is ongoing and we’re spending the weekend brainstorming and communicating with contractors. The hard work is only just beginning! We’re also planning a trip to the renowned Sunday crafts market in town as a well-deserved break and to soak up some more of the culture. 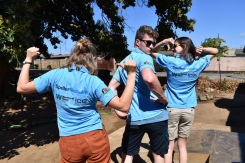